In April 2020 Covid-19 sent oil futures into negative territory as demand dried up.  This meant that oil producers were paying buyers to take the oil off their hands over fears that storage capacity would run out.  Within two years, the price for oil, and other energy commodities, have surged causing a global energy crisis.

As energy prices increase, so do the prices of everything that is made from them, such as fertiliser.  That, ultimately, adds to the price of food, putting further pressure on the cost of living.

Energy is one of Russia’s most powerful tools and is a key source of income and political leverage when influencing Europe, as it supplies much of the continent’s oil and gas.  The UK is not significantly dependent on Russian oil and gas but is impacted by price increases.  Russia’s invasion of Ukraine reaffirms that there must be a shift away from fossil fuels; dependence on fossil fuel empowers authoritarians like Vladimir Putin and rouge oil-producing nations.

Renewable energy projects were, up to a month ago, a response only to the climate crisis.  The push for renewables, energy efficiency and emissions reductions are now a security priority.  Renewable energy projects, along with other low carbon activities, have an important role to play in severing our dependence on Russian fossil fuels.  This move away from fossil fuels is not a simple task, but North Wales is already playing a crucial part in this transition.

In 2021, the UK Government announced £4.8 million to develop hydrogen power in North-West Wales.  Hydrogen, produced through electrolysis, is increasingly recognised as an energy that can provide a unique role in the transition away from fossil fuels.  The funding will help develop hydrogen technology in the region and provide new opportunities for North Wales economy.  The UK Government believes a UK-wide hydrogen economy could be worth £900 million and create over 9,000 high-quality jobs by 2030.  North Wales has the infrastructure and skills needed to reap the benefits from the hydrogen economy.

Beginning of March, the £590 million tidal lagoon on the Flintshire coast was announced to be forging ahead with two milestone developments.  This renewable energy scheme would provide low carbon electricity for 82,000 homes.  It was announced last week that Morlais, a tidal energy project off Anglesey, will benefit from £31 million of EU funding which will allow it to become one of the largest tidal energy sites in the world.  This is likely to be the last large grant from the EU’s regional funding programme, and the Conservative government has failed to match EU funds lost due to Brexit.  Morlais aims to develop tidal power generation technologies by providing grid connectivity and will have the potential capacity to power over 180,000 homes once fully operational.

It is hard to predict how the situation in Ukraine will unfold, however it seems that we are poised for a period of high energy prices that are driven, primarily, by war.  The dual crisis of climate and security requires us to continue supporting the development of renewable energy projects across North Wales. 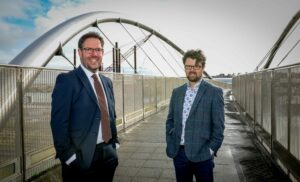