Trearddur Bay Lifeboat Station has sent its thanks to workers on the nearby Morlais tidal energy site for donating £110 to the charity.

The team from contractors, Jones Bros Civil Engineering UK participated in a sweepstake during the FIFA World Cup in Qatar at the end of last year to raise money towards the lifeboat. The charity is supported entirely by voluntary contributions and relies on the kindness of the public. With the public feeling the pressure of the cost-of-living crisis, charities like RNLI Lifeboats are receiving fewer donations.

Bill Rogerson, the Honorary Treasurer at Trearddur Bay Lifeboat Station, said: “We are extremely grateful for the contribution made by the team at Jones Bros. The money is a boost and will help us maintain the high standards of our two lifeboats and equipment at the station. Making sure we are ready for any emergency is crucial for any lifeboat team, so we were very pleased when we heard about the Jones Bros donation.

“Receiving contributions from local companies is essential to us as volunteers; all donations help us save lives at sea.”

Bryn Williams, Jones Bros’ public liaison officer at Morlais, added: “As an appreciation of the tireless work they do, we wanted to donate to the lifeboat volunteers at Trearddur Bay.

“Improving the local environment and giving back to the community is extremely important to us, so we were thrilled to be able to raise money for such a significant charity.”

Morlais is the largest consented tidal energy development run by a social enterprise in the UK. Once constructed it will see clean electricity generated off the coast of Anglesey and has the potential to scale up over time to a generating capacity of 240MW.

The project is funded by the European Regional Development fund through the Welsh Government.  It is also supported by the Isle of Anglesey County Council, North Wales Growth Deal, as well as The Nuclear Decommissioning Authority. 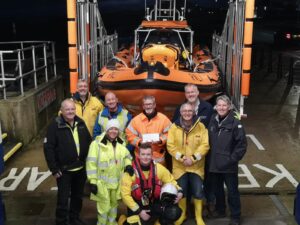 For further information please contact Mabon Dafydd on mabon@atebcymru.wales or 01248 565638